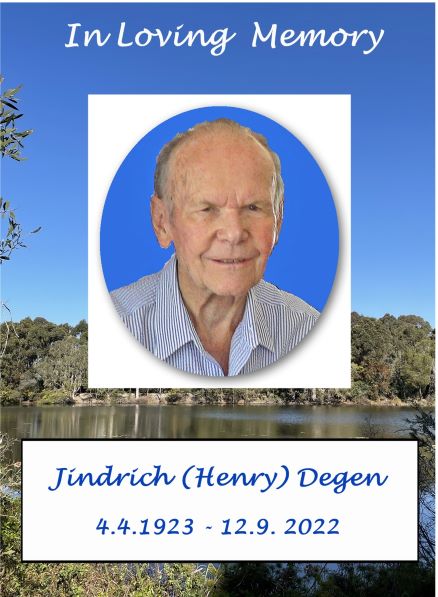 Jindrich Henry Degen’s family are sad to announce that Henry passed away on September 12, 2022 at the age of 99.

Here is a small part of Eva’s eulogy for her father that we want to share in this In Memoriam:

After reaching 90, my dad walked a bit less and slower, but he was still quite fit and always enjoyed the lovely Redlands out-of-doors. He did remarkably well for his age, both physically and mentally, compared to many of his younger friends. He didn’t suffer from the usual modern diseases like diabetes, heart disease and cancer. He didn’t need medications, but enjoyed natural supplements and herb teas. Most people couldn’t believe his age.

He was still productive, and drove his car till almost 96. At that time, he contracted a urinary tract infection, which affected his thinking and landed him in hospital for a time. The antibiotics and other medications he was given for a few other issues caused him low blood pressure, dizziness and falls. He had five or six short hospital stays within about three months. While this was a turning point, and he could no longer drive, he bounced back to a considerable extent and was given another three years of life.

During the last three years, he gradually grew frailer, needed a walking stick, a personal alarm, help from Blue Care to take him shopping and clean his house, and more help from Alex and myself with finances, his Apple devices, and other things. He loved to play word games on his iPad and was able to use his iPhone successfully till almost the end. We talked on Facetime every morning and even included our cat Whitey in our video calls when dad asked about her.

The beginning of the end came late on Father’s Day (which in Australia is in the first week of September). Close to midnight, he had a bad fall next to his bed and was taken by ambulance to the hospital. Thankfully no bones were broken, but he scraped his skin badly on his leg and arm and needed stitches. He was put on antibiotics, pain killers and a few other drugs. On Monday morning, he called me and explained very coherently what happened, and expected to be back home the next day.

Over the following few days, however, he became confused and even delirious – which is common for older people in hospital settings. He had good days and not so good days. According to the different nurses that we had spoken to, the prognosis was anything from passing away in hospital or palliative care to going to a nursing home to possibly coming back home with additional assistance after a period of rehabilitation. But from my observation, his body and cognition were declining. His age of near 100 was simply catching up with him.

On Sunday, he had a good day. I had a very meaningful call with him in the afternoon. He thanked me and Alex for all our help and support and wished us all the best. He said he was departing and expressed a desire to see us one more time.

Even though it was late afternoon and the nurse felt his vital signs were good and it was OK to come the next day, I strongly felt we should go, so we drove to the hospital about an hour away. We spent over an hour with him and brought him a “farewell letter” that I wrote a few days before and read to him over the phone. I read it to him again and left it on his bed. As we left at the end of the visiting hours, he was lucid and in good spirits.

On Monday morning, on his 8th day in the hospital, around 8 am, we received a call from the attending doctor that he had an aspiration episode (his food went into his lungs because of his swallowing difficulty), causing a significant distress – the possibility of which they had been concerned about all week. The doctor felt this could be a terminal situation. The staff made him comfortable and he peacefully passed away late that afternoon – less than 24 hours after we saw him.

I have no doubt that everyone’s prayers for him and us were heard and answered. We feel grateful for all the help and support, and especially for the guidance to go and see him on Sunday night while he was relatively well. We feel at peace with his passing as that was the best outcome.

Dad really was an unusual and wonderful person – very creative, versatile, and skilful, a person of dignity and integrity, kind, loving, peaceful and gracious, not clinging onto past hurts and never bringing out old skeletons. He was always thankful, never demanding, and seldom got grumpy, angry or complaining.

From his orchestra days when he had to be on time for rehearsals and performances, he remained a stickler for time all his life – and would get slightly annoyed with people being late. He was generous not only with us and others, but he supported about 30 causes and charities with a small annual donation.

He will be missed, but we are grateful for the blessed times we had with him over the last 16 years or so, and feel confident that he is in a good stead for his life on “the other side of the veil.”

I would like to thank you all for your support, prayers and sympathy and for coming to pay a final tribute to a special man, who I am very proud to be his daughter.

A special piece of Indian Elder Wisdom read during the funeral service can be found at Chief Tecumseh, Shawnee Nation, 1768-1813.

*** Since his retirement from Melbourne Symphony Orchestra as a classical oboist, Jindrich Henry Degen produced a prolific amount of art. Most of his paintings will need a home. The galleries attached to this page show what is presently available at very low cost, or possibly free of charge. More works will be progressively added to these displays.  If interested, please use the contact form and we will respond asap. ***